We began our Elder’s Hours at Diamond Willow Youth Lodge with an Elder named Blair Thomas. As youth poured into the space, Blair led us all in a talking circle. We started off with an opening smudge and prayer and an introduction of our names and where we are all from. The youth really opened up about their dreams and what they see for themselves in the future and we all got to know one another. They spoke up about the things they love to do and it was a really great way for them to get to know the people around them and see how much they all had in common. As we all got to know each other, we realized that many of us had a shared interest in art and creativity. Blair suggested to some of our youth council members that were present, that they might collaborate on an elder-guided art project the next time he came for Elder’s Hours. Two weeks later, we held a paint night guided by our elder Blair Thomas and one of youth council members, Princess Lightning. We talked about creation stories and one that the youth really enjoyed was the story of turtle island—the turtle is said to support the world, and is an icon of life itself. The term “Turtle Island” therefore speaks to various spiritual beliefs about creation and for some, the turtle is a marker of identity, culture and a deeply-held respect for the environment. The name comes from various Indigenous oral histories that tell stories of a turtle that holds the world on its back. The youth each painted one of four canvases that came together to form one turtle—symbolizing how youth can come together to create something wonderful at the Lodge. They decided to add the word “connection” in Cree syllabics on the bottom of the painting because through this piece of art the youth joined together to work as one as they connected to their traditions, their oral histories and their local Elders. 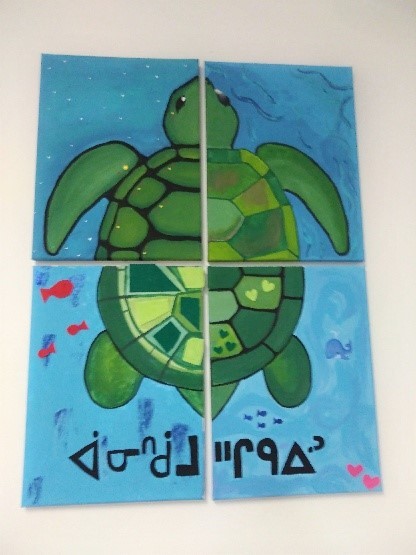